No matter where I live, Massachusetts and Boston will always be considered home for me. The Boston Marathon bombing on April 15, 2013 affected the whole country in some way or another. Our spirit may have shook for a brief moment, but today we stand united and banded as a people. There are things in life that we witness, or are a part of, that we cannot control; things such as the loss of a loved one, destruction of our home, war, violence, and abuse. These things may have short term or long term lasting effects on us.

There is a very effective acupuncture treatment that can be used to help one cope through such difficult times. It is called the NADA protocol. This protocol consists of needling 5 points in the ear. The points are referred to as: Sympathetic, Shen Men, Kidney, Liver, and Lung. What started out as a drug addiction and detoxification protocol is now widely used for PTSD. Acupuncturists Without Borders (AWB) began in September 2005 treating people using this protocol that endured the devastation of Hurricane Katrina. It was so successful that AWB has now expanded to include a Military Stress Relief project, treating soldiers returning from Afghanistan and Iraq. This project consists of volunteer acupuncturists that use the NADA protocol to respond to emergencies and disasters worldwide. They have helped thousands of people all over the world affected by trauma and disaster.

I myself have used this protocol more times than I can count, for everything from drug addiction/withdrawal to PTSD. The needles are usually done in a group setting and retained for 30-45 minutes. Those affected by trauma are usually left feeling vulnerable and unwilling to talk about the events as which they have been effected by. As a patient receiving this treatment, you do not have to talk about the events which have brought you in for treatment. The treatments are just as effective with or without communication between the patient and practitioner. After being treated with this protocol, patients are left feeling less anxious, stronger, and more relaxed. This protocol is usually done in a group setting which allows patients to also feel more comfortable and safe. It also allows for the practitioner to be able to treat more patients at a time and thus help more people.

Everyone has been affected by some sort of trauma in their life. You are not alone, and you don’t need to lock it away or suffer. There are many ways to cope with trauma and disaster and now you can also add acupuncture to that list. 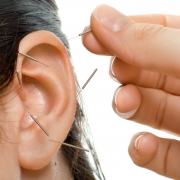